Celebrate American Craft Beer Week at HooDoo Brewing Co.!
ACBW provides an opportunity for Fairbanksans to celebrate the ever advancing beer culture here in the U.S.

It’s here! The nationwide celebration of suds. No need to hold your pinkie high when you sip your Belgian ale. No need to isolate yourself so you can dissect the nuances in your beer. You don’t even need to like hops! Sounds crazy, right? But that’s what’s so cool about American Craft Beer Week, a 7 day celebration for all things barley, hops and water. So in observance, we swirl and sip delicious beer, eat food from local vendors, taste pairings, and learn a bit more about this pint-sized nectar.

Even after repeal, Prohibition affected the American beer scene. Palates had lost their taste for the richest of beer styles; most small, independent breweries didn’t survive the 13-year drought; and post-Prohibition laws unwittingly encouraged use of cheap adjuncts. 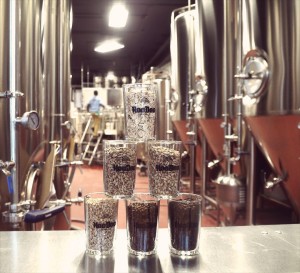 Choices now, however, range from mild lagers that rest easy on the palate to rich ales bursting with flavor, alcohol and bitterness. Creativity introduces variations on existing styles and a diversity of added ingredients — fruits, spices, honey, herbs and much more.

To celebrate American Craft Beer Week, we will have a variety of styles to choose from in the Taproom. Six different ones to be exact. We will also have some extra-curricular activities to partake in. This year will feature the release of HooDoo’s 2015 Maibock Lager and a unique limited release Maibock t-shirt and poster produced in collaboration with local artist Brianna Reagan. Also, people can sign up for beer appreciation classes with Bobby, enjoy an All-American Vinyl Tuesday with Retrograde Media’s Brady Gross, and participate in a toast that will be read a a huge group on Friday night. For Biergarten Grub, The ever-popular Pretzel Chef will be here along with local food truck newcomer, Wholee Smokers BBQ. They will be available during business hours all week long. 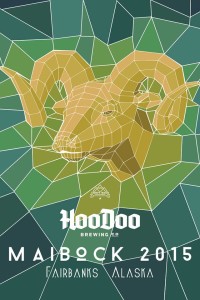 With our Maibock comes great art. This year’s featured artist, Brianna reagan, gave us a unique design. Posters and tee-shirts will be available starting Tuesday May 12.

Monday, May 11:  We’ll launch a photo scavenger hunt on Instagram, Facebook, and Twitter. Participants can email karen@hoodoobrew.com or tag #HooDooACBW each day. 1 winner will be chosen each day, plus 5 overall winners on Sunday May 17 for great HooDoo swag. 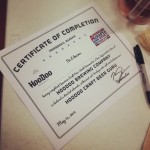 You too can be on your way to craft beer guru-ism. Take a class with Brewmaster Bobby!

Saturday, May 16:
3pm-8pm: The Pretzel Chef & Wholee Smokers BBQ in the Biergarten
NOON: Cask Maibock & super special secret announcement to customers and community
1pm, 3pm, and 5pm: ongoing throughout the day, tours of the brew process with Brewmaster Bobby.