It’s Alaska Beer Week, January 13 through January 22, ten days of frothy fun celebrating all things craft beer in Alaska. Created in 2011, AKBW celebrates the depth and diversity of craft beer here in the Last Frontier with beer-centric events held throughout the state. HooDoo Brewing Co. has a full line-up for our home-town of Fairbanks. From showcasing local food to beer releases, all craft beer lovers will find something that week that appeals to you and your tastebuds.

Each year, to kick off Alaska Beer Week, HooDoo releases our annual English Barleywine, a favorite local winter-time offering and the strongest of all English Ales. For 2017, we’ve updated the recipe to introduce a more traditional English Ale yeast to the flavor profile. Patrons will taste the delicious difference, but the beer is still as full-bodied, caramel-flavored and warming as ever at 9.1% ABV. The 2017 Barleywine will tap at Noon on Saturday, January 14.

On Wednesday, January 18, we will have available our limited run bottling of 2017 TUSK, an English Barleywine blend. For 2017 TUSK, we perfectly combined our barrel-aged 2016 Barleywine, the 2017 Barleywine and the steel-aged 2013 Barleywine to create a wonderful cacophony of flavors in one elegant blend. Rich, malty and lightly tart this is a perfect beer for celebrations and cellaring. Each bottle is hand-numbered and packaged into 750ml Belgian flip-top bottles adorned with custom art by local artist Brianna Reagan. 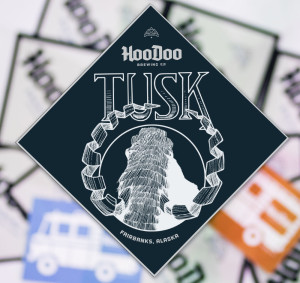 TUSK Barleywine blend releases in bottles on Jan 18 and is a perfect combo of our barrel-aged 2016 Barleywine, the 2017 Barleywine and the steel-aged 2013 Barleywine to create a wonderful cacophony of flavors to make one elegant blend.

Also on January 18, patrons can taste several different HooDoo Barleywines from our cellar in the HooDoo Taproom. For one day only, we will tap the 2013 Barleywine, 2015 Barleywine, 2015 Mammoth Barleywine blend, and 2017 TUSK for tastes and vertical tasting flights.

To round out beer releases for the week, we are making our popular CASK Saturday series available during the week. Each cask, or 10.8 gallon firkin, is filled with a different HooDoo beer style, then “aged” with various flavorings, from coffee to citrus peels to even jalapeños! Casks for Beer Week will be Thursday, Friday and Saturday and will be German Kölsch with Alaskan blueberries, American IPA with Alaskan roasted cold brew coffee, and Vanilla Porter with Alaskan low bush cranberries, respectively.

New this year is a Tap Takeover and Beer Trivia night at Lavelle’s Taphouse, located at 414 2nd Ave. We will be putting a large selection of beers on tap at the Taphouse and patrons are encouraged to grab some teammates to compete for prizes in their Beer Trivia game. Tap Takeover starts at 5:00 p.m. and Beer Trivia will start at 6:00 p.m.

One of the most exciting things about beer week is collaborating with local establishments to offer tasting events with food and we have a couple of fun, new events this year that offer an out-of-the-box way to go about pairing beer and food. 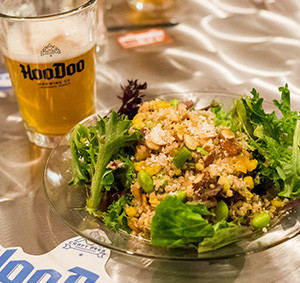 Kegs, Eggs, and Cocktails with Lavelle’s Bistro is one of those special events that will take place on Sunday, January 14 at 11:00 a.m. The chefs and bartenders at Lavelle’s collaborated with HooDoo to create an exciting four-course brunch complete with complimentary brews and “beer-cocktails” that are all the rage in the Lower-48. Tickets are $50.00 can be purchased by calling Lavelle’s at 450-0555.

We also collaborated with the chefs at Lemongrass Thai Cuisine to develop Thai One On, a night of pairing their delicious Thai creations with different HooDoo beers, on Tuesday, January 17 at 7:00 p.m. There is very limited seating for this 5-course dinner and tickets can be purchased for $59.95 by calling 456-2200.

Another great way to test flavors, is to pair beers with cheeses from around the world. The cheesemongers from Fred Meyer’s will be bringing samples and cheese-smarts to the HooDoo Taproom on Thursday, January 19 from 3:00 to 7:00 p.m. 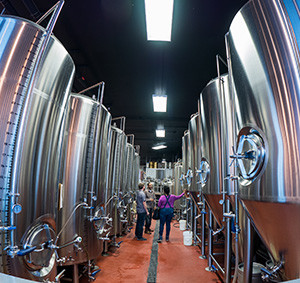 Take a tour of our facility, but be sure to bring your beer…

See how local, fresh beer is made during a free tour of our brewery. Owner/Brewmaster Bobby Wilken will lead a group of up to 15 people at 2:00 p.m., 3:00 p.m., and 4:00 p.m. on Saturday, January 14. Reservations are recommended by calling 459-BEER or by signing up in the Taproom. Having a beer while on tour is encouraged.

So Fairbanks, it’s the time of year to revel in all things Alaska Craft Beer and share with the rest of the state by tagging #AKbeerweek on your social media posts.

If you’re in Anchorage, you’ll find us at the annual Great Alaska Beer & Barleywine Festival, January 20th and 21st. Come say hi! It’s always a great time, and a good chance to sample everything Alaska craft beer has to offer. Find tickets here.

9-10:15 a.m. – Yoga On Tap with Taryn, community yoga benefitting the Fairbanks Animal Shelter. $10 drop-in donation.
Noon – The HooDoo Barleywine 2017 will be tapped. Barleywine 2017 is HooDoo’s interpretation of a classic English barleywine; the strongest of all the English ales and a showcase of intense malt flavor and complexity, made with a new recipe this year.
2:00 p.m., 3:00 p.m., and 4:00 p.m. – Free brewery tours with Owner/Brewmaster Bobby Wilken. Reservations are recommended by calling 459-BEER or by signing up in the Taproom.
3-8:00 p.m. – Frostbite Foods in the Taproom

3:00 p.m. – 2017 TUSK Barleywine blend release in limited, hand-numbered bottles.
3-8:00 p.m. – HooDoo Barleywine Verticals. If you missed the barleywine, here’s your chance to relive it. From the cellar, HooDoo will be tapping 2013, 2014, and their 2014 wheat whiskey barrel-aged barleywine.
3-8:00 p.m. – The Hungry Robot hand-tossed wood-fired pizza in the Biergarten