Big to do about HooDoo, by James “Dr. Fermento” Roberts 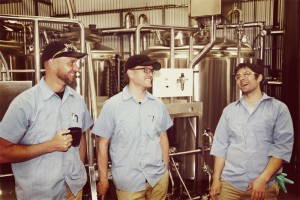 We were very excited to have Alaskan beer enthusiast James “Dr. Fermento” Roberts in Fairbanks and at our brewery for the inaugural brew over Labor Day weekend. He’s been keeping tabs on our progress since catching wind of HooDoo happenings last year, so it was great to get him here to see the operation first hand.

Check out his article for the Anchorage Press , re-posted here. All photos below are from Dr. Fermento.

Thursday, September 6, 2012
I got a last-minute call from HooDoo Brewing Company in Fairbanks last Friday. After clearing a bunch of legal hurdles, they finally became fully licensed to brew. Wasting no time, they decided to brew their inaugural batch of beer on Sunday, Sept. 2. They laughingly tossed out an invite for me to attend and assist in this brewing session, which will finally put Alaska’s 23rd licensed brewing entity on our foamy map. 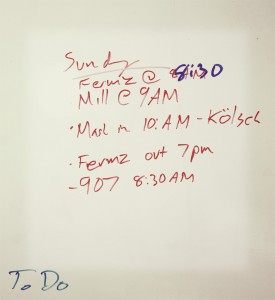 HooDoo Brewing is the brainchild of former Alaskan Brewing Company brewer and quality control technician Bobby Wilken. Wilken was born and raised in Fairbanks and spent two and a half years in Juneau at Alaskan as brewer, then another two years as a quality control technician. It’d always been his dream to brew in his hometown—breweries existed in Fairbanks at the turn of the century and a bit beyond, but no local suds have flowed from the city’s confines since then.

This isn’t the first “up north” brewery however. Silver Gulch Brewing Company opened in Fox, 13 miles north of Fairbanks in 1998—it’s well established and well entrenched as North America’s northernmost brewery. Silver Gulch produces a stellar lineup of file ales and lagers, but HooDoo is the first Fairbanks brewery in a long, long time.

Wilken did a stint at school in Missoula, Montana, and there he discovered craft beer at the nearby Big Sky Brewing Company. “I thought it was awesome. I started drinking good beer back then. I got a homebrew kit and made a couple of batches,” he says. As far back as 1999 or 2000, Wilken said, he decided that one day he would have his own brewery. In anticipation of all of this, Wilken attended the legendary Siebel Institute of Brewing and interned a bit in Munich. He never lost his passion for brewing, and got a more local internship at Juneau’s Alaskan Brewing Company.

Wilken flew solo for a while, painstakingly putting together a plan for a brewery, securing a location, and lacing up the gloves with the legal beagles, inspectors and other bureaucrats that make launching a brewing venture generally a pain in the ass. It was tough going for Wilken until he enlisted the help of another former Alaskan brewer, Erick Heimbigner, and his brother-in-law Paul Johnson. Once on board, things got going in earnest.

With bold aspirations of launching by December of 2011, Wilken bought the building, a relatively trashed industrial structure. With little personal construction experience, Wilken didn’t get the concrete floor modified and poured until last November. 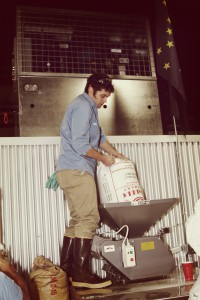 One of Wilken’s key strengths is resourcefulness. “With zero construction experience, I use the people I know as a resource,” says Wilken of his many friends and supporters. Even Alaskan Brewing Company was supportive, and Wilken credits his former colleagues for helping move things along. Curtis Holms, the plant manager at Alaskan, “was great. He provided a lot of ‘brewing at 20 below’ knowledge.”

Nearby Silver Gulch Brewing Company has also been hugely supportive of the brewery, understanding that there’s plenty of room for more good beer, especially way up north where the local palate continues to emerge. The brewery tanks arrived in January 2012 and the rest of the brewhouse in February. With the help of Johnson and Heimbigner, the trio slowly cobbled the place together.

I asked Wilken what his biggest hurdles were along the way, although I knew the answer already. “Dealing with Fairbanks city limits, contractors, plan reviews, licensing and inspectors,” he says. With virtually no brewery experience in the construction industry and other involved entities up north, it was always like starting anew. Wilken literally had to educate those he worked with about what brewing is, the complexities and how the processes, needs and materials are different than in other industries. “Most of the time I sat around wondering who’s ass I had to kiss next,” he said. This is so typical for upstart breweries. 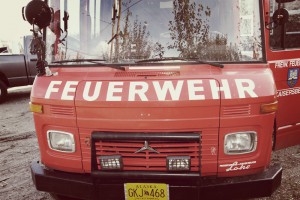 Wilken was quite surprised when I called him back and asked if I needed to rent a car, or if someone from the brewery could pick me up at the airport on Sunday morning. When I arrived, Wilken proudly picked me up in the brewery’s charmingly converted BMW fire crew transport vehicle from Austria. This one-of-a-kind in Alaska vehicle sticks out like a sore thumb wherever it goes and has unintentionally served as the upstart brewery’s primary advertising platform. “We can’t even go to the hardware store in it without getting stopped in the parking lot by curious onlookers, brewery supporters and anyone with an interest in weird vehicles asking tons of questions,” says Johnson.

We spent a long day getting the first batch of beer, a Kolsch, through the brewing system and into the fermenter. The trio was as excited as they could possibly be and I was proud to be a part of the karma. 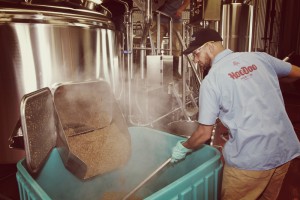 Don’t look for HooDoo brew to grace taps any time soon, however. “We’re moving purposefully slow,” says Wilken. “We really want our first brew to tap in our tasting room here. We’re not chasing down accounts that we might not be able to service until we work the bugs out of the system and make sure we can support the people that want our beer.”

The brewery plans to start with the Kolsch, followed by a Belgian-style saison, and then round things out with an IPA and Belgian-style dubbel. “We’ll open possibly in a month,” says Wilken. “But we might pour the Kolsch or the dubbel as a one off at the September 22 Talkeetna Beer Festival, if the beer is ready.”

Regardless, it’s great to see the brewery finally come on line since I’ve been monitoring the pulse of the operation for two years now. Look for more great suds flowing from the interior up north soon.