We are honored to be featured for an article in Anchorage-based Alaska Dispatch News. Reporter Suzanna Caldwell did a great job of capturing our passion, our love for Fairbanks and our patrons.

Fifteen years ago, Bobby Wilken was just a typical college student living in Missoula, Montana, who dabbled in home brewing and frequented nearby breweries. But the more time he spent in those breweries, the more he found himself fascinated with the science of beer.

It was there that the idea of opening his own brewery was sparked. Born and raised in Fairbanks, he figured maybe one day the carboys he filled with homemade beer might be something more than just drinks between him and his friends. Maybe they would be something he could bring back to his hometown. 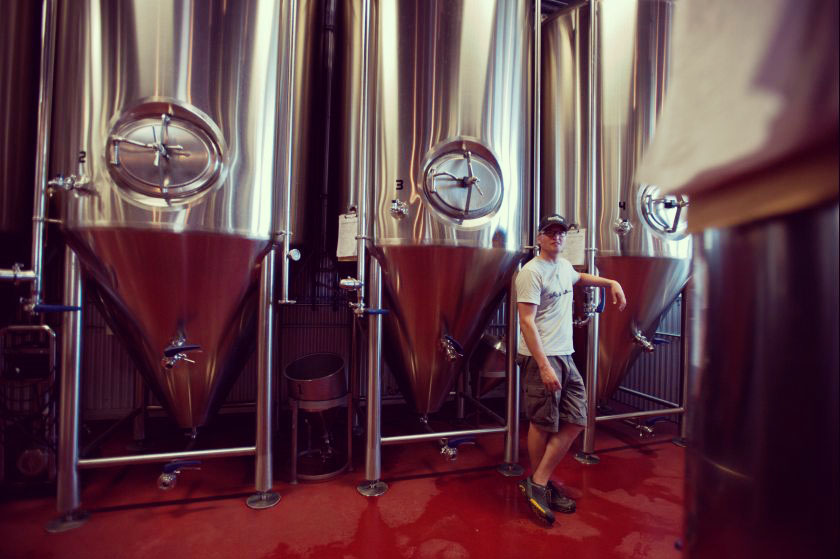 Bobby in front of the fermentation tanks at HooDoo.[/caption]Today, Wilken, who opened Fairbanks’ HooDoo Brewing Company in late 2012, said it’s a surreal experience to see T-shirts representing his brewery around town.

He’s not the only one who thinks it’s awesome. Head to Fairbanks and it’s hard to miss HooDoo, even if you don’t drink beer. The brewery, named after the nearby mountains that are home to the annual Arctic Man games, is asserting its dominance in the Golden Heart City.

HooDoo T-shirts, sweatshirts and baseball caps dot the landscape like major league logo gear. HooDoo bumper stickers are so common you might assume they were necessary for registering a vehicle in the Interior. From opening to close, even at 3 p.m. on weekdays, the HooDoo tasting room is filled with locals. Bringing along a growler or two of HooDoo brew is more or less standard operating procedure at barbecues and parties.

Oh, and it helps that the beer is pretty tasty too.

“They are changing the perception of what fresh beer is in Fairbanks,” said Glenn BurnSilver, former features editor at the Fairbanks Daily News-Miner and freelance beer critic.

Craft beer is big business in Alaska and around the country. Nationally, major producers like Budweiser and Coors have seen a drop off in sales, while local and craft beer has exploded. Alaska has experienced that trend, too. There are 22 breweries in the state in 16 different communities. Total payroll for all those breweries equated to $7.6 million last year, according to a state economic trends report [2]. HooDoo is one of two craft breweries operating in or near Fairbanks. Silver Gulch Brewing and Bottling Co. opened in Fox in 1998.

HooDoo serves some styles that might be foreign to the average beer drinker, but Fairbanksans have been lapping it up. Wilken said one of the brewery’s signature drinks, the Kolsch, is so popular he can barely keep it in stock anymore. 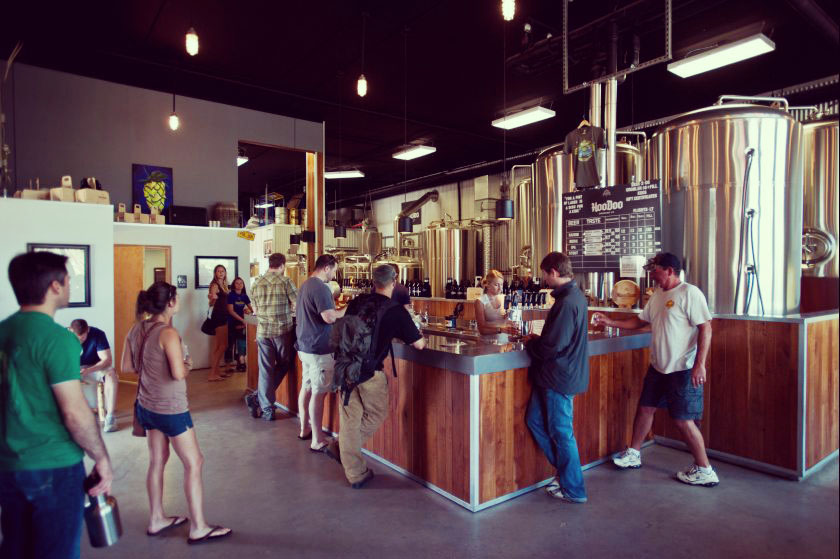 Despite the popularity, the brewery is keeping things modest for now. HooDoo produces about 30 barrels — or 1,000 gallons — each week, with only a tasting room and a handful of taps in Interior Alaska. In comparison, Alaskan Brewing Company in Juneau, Alaska’s oldest and largest craft brewery, produces just under 3,000 gallons a week and sends their beer to 17 different states.

But maybe one day HooDoo will get there, given Wilken’s Alaskan Brewing Company roots. After attending brewing school in Chicago and Germany, he headed to Alaskan, where he worked for four and a half years as a brewer and technician.

He’s not the first Alaskan brewer to find success outside of Juneau. Andy Klein, communications manager for the brewery, said a handful of brewers or employees of the brewery have gone on to find success in other places. Jim Roper helped founded Four Peaks Brewing Company in Tempe, Arizona. Engineer Brandon Smith, who helped design the brewery’s beer-powered-beer energy system that uses spent grain to produce electricity, joined Sierra Nevada Brewing last year. Even one of the early founders of Oregon’s popular Rogue Ales, Jim Maier, got his start at Alaskan, leaving in the late ’80s to help start Rogue.

Klein said the brewery is proud of Wilken and his success.

“He’s a really talented guy who’s passionate about beer,” he said. “He’s in it for the right reasons and just wants to make great beer.”

HooDoo Brewing Company has been hailed as the first in the Fairbanks city limits in over 50 years. While that might not be completely accurate (others have cropped up over the years, but none have lasted long), Wilken is taking his venture seriously. He and his wife, Jessica, spent years working over plans for what the brewery should look like, ultimately settling in an unlikely location in an industrial area off of Phillips Field Road.

At 4,000-square feet, it’s the perfect size for the brewery and accompanying tasting room, Wilken said. The space, in an old ‘70s pipeline-era warehouse, has been remodeled with a minimalist aesthetic in mind. There are clean lines, corrugated metal, heavy wood tables and only a few simple, beer-related posters adorning the walls. Large brewing tanks stand in the background in full view. 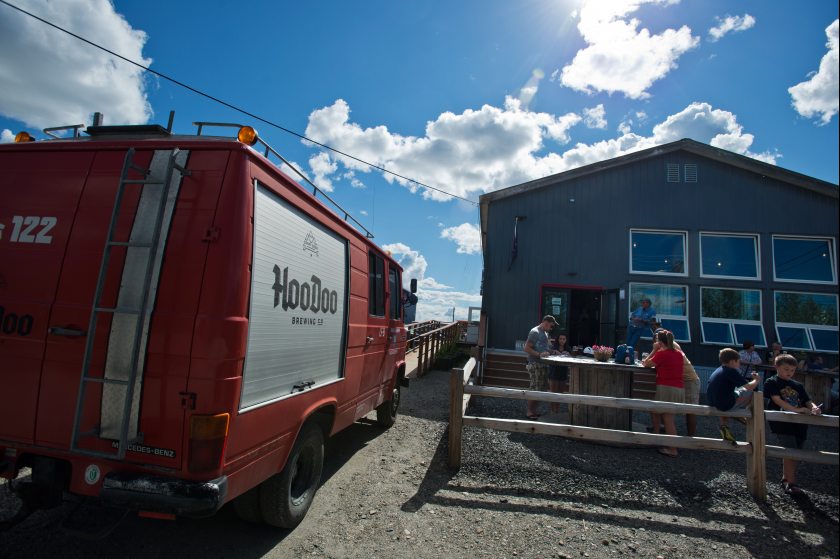 Customers can enjoy their beer outside the Taproom in the Biergarten.
Photo: Mark Lester – Alaska Dispatch News

Not only is it practical for brewing, the space has also found its niche in the community. Show up in the middle of the afternoon on a Tuesday — an unlikely time to have a beer — and odds are it’s packed. By being smoke-free and immaculately clean (a point of pride for Wilken), the tasting room has set itself apart from other Fairbanks watering holes.

BurnSilver, who lives in Arizona but has spent the summers in Fairbanks, frequents the tasting room. He said the atmosphere has a casual vibe; it’s a relaxing spot to decompress after a busy day.

“You walk in and feel like you know everybody, even if you don’t know anybody,” he said.

Part of the casual feeling is by design, part by rule. Because of the brewery’s permitting, state law requires it to adhere to certain rules in order to serve. Patrons can only imbibe 36 ounces of beer per visit. No TVs or games are allowed on the premises. No chairs are allowed at the bar. Hours of operation are limited, closing early at 8 p.m.

Wilken said at first he felt challenged by some of the restrictions, but has grown to embrace some of them. While he wishes they could be allowed space for horseshoes or other pub games, he appreciates the early closing time, since it gives him a chance to have a life outside of the brewery. He said the biggest challenge has been with the serving limit. While he likes that it keeps people from drinking too much — in two years of operation they’ve only seen two very small acts of vandalism, something he expects he would see more of in a traditional bar setting, he said — it’s hard to police, though servers do their best.

He also wrestles with the idea of having more food. When he was initially starting the brewery, he considered a pizza pub, similar to the Moose’s Tooth in Anchorage.

But before he settled on that prospect, Wilken and his wife, Jessica, headed to Portland and Seattle to learn more about the idea. He was surprised when many brewpub operators told him to steer clear of the model, since restaurants can be time-consuming, risky business ventures.

“Most said ‘don’t do it.’ The restaurant business is so big and difficult,” he said. “Man, if there is any way to just make beer, just do that.”

Wilken’s attitude toward serving food is “never say never,” but for now he’d rather focus on the beer (food trucks do rotate through a few days a week)

That plays into his hopes to develop a “beer culture” in Fairbanks. A giant beer garden, maybe even an acre in size, or something in Pioneer Park, is more his style.

“People are seeing (the beer) not as the alcohol, but more the HooDoo side of it, the social side of it,” he said. “That beer can be this fun, delicious thing.”

BurnSilver thinks the passion Fairbanksans have for the beer is due in part to its being so local.

Fairbanks has always had access to Silver Gulch Brewery, located 10 miles outside of town in Fox. But it doesn’t invite the “this is ours” feeling HooDoo does, he said.

“When you think of all the homegrown events and businesses and things that happen in Fairbanks, they always get great support from the people of Fairbanks,” he said. “Because the people in Fairbanks are proud of what they have.”

Frank Eagle, owner of Lavelle’s Bistro, a popular upscale restaurant in Downtown Fairbanks, keeps HooDoo on tap. Even though Lavelle’s is better known for its wine, the brews are popular at the bar. People in Fairbanks are craving it and all craft beer, Eagle said. He said when the bistro caters events people almost always ask to have local beer available on tap, ideally from HooDoo.

Even Silver Gulch president Glenn Brady is happy to have them. Brady noted that Silver Gulch helped champion legislation passed in 2007 to allow tasting rooms to sell up to 36 ounces of beer to visitors. Before that law passed, breweries could have tastings rooms, but couldn’t charge for samples. Without that legislation, operations like HooDoo’s tasting room wouldn’t exist today.

“We’d rather everyone around here was drinking beer made locally, not from Lower 48,” he said. “There’s something to be said the about the rising tide floats all boats.”